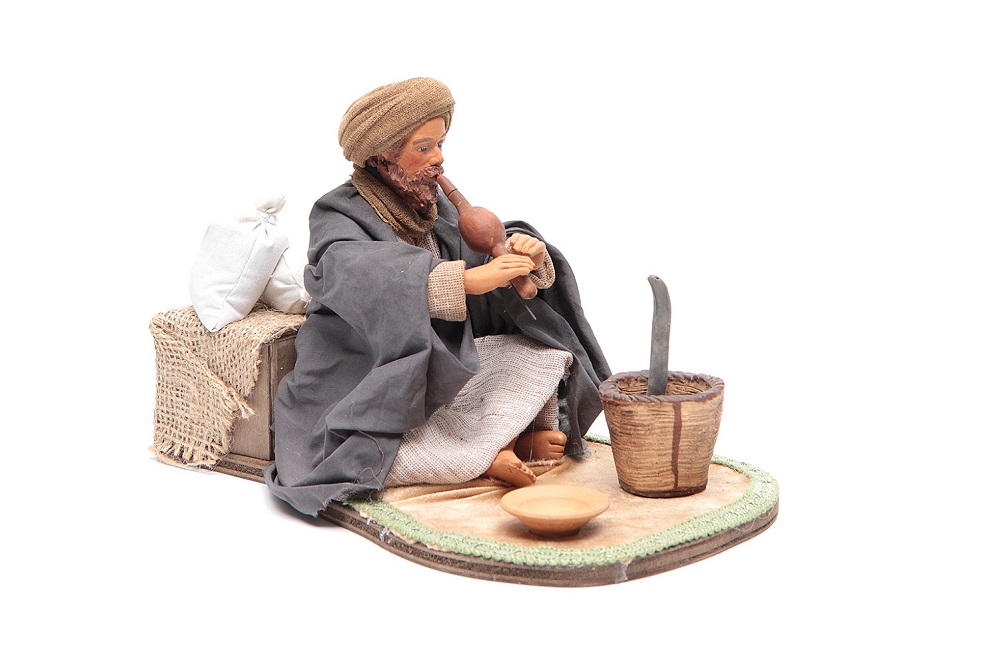 The Nativity scene is one of the most famous and spread traditions connected to Christmas. At least in our country, there are very few homes that have no box containing the wood and cork hut, small rocks and pieces of bark, moss turned gray because of time and thin because of usage.

And then, of course, the little statues of the Nativity, Mary and Joseph first of all; she wears blue and pink clothes, with a veil on her head and the sweet attitude you would expect from a mother. He is standing, leaning on its cane, protecting and watching over his new family. And then the little Jesus, with blond hair and blue eyes, safe in the manger that was his cradle in the first and cold night in the world of men.

When the tradition of Nativity scenes was born, in the medieval age, they were the only characters of this reenactment, with the ox and the donkey.

Naples was one of the center points of development and spread of this particular art from the beginning. Because it is art indeed, when we talk about the Neapolitan Nativity scene, called “o’ Presebbio” by the locals. The creation of settings and statues for the Nativity, and the whole apparatus that is typical of this kind of Nativity, was at the beginning a prerogative of excellent artists and artisans, who passed on techniques and secrets from father to son, generation after generation.

In addition, many famous painters and sculptors decided to try this type of art, for which rich families were willing to pay lots of money in order to have the biggest and most beautiful setting they could show off to friends.

Still today, there is a whole neighborhood in Naples dedicated to Nativity scenes, Via San Gregorio Armeno, which lures many curious tourists from all over the world every year. Here you can find all you need to create your own perfect Nativity scene, such as supports, buildings, many architectural and landscape details, besides an almost endless number of figures, from the most ancient traditions to the most modern characters, which renovate every year, as politicians, singers, football players, and so on.

The materials used for the Neapolitan Nativity scene were poor, such as wood, stones, cork, straw, and that also shows the popular dimension of this unique form of art. Statues were made of wood or terracotta. Later, during the Baroque age, articulated dummies made of wood, wires and tow began to show up, dressed with fabrics and made even more realistic with amazing details.

What makes the Neapolitan Nativity scene so special, compared to other good traditions of our country?

For sure, theatricality, the fact that it so vividly and picturesquely reproduces real life and common people such as merchants, artisans, shepherds, and all the other colorful and mixed people in the scene, making it at the same time realistic and ironic.

In the Neapolitan Nativity there is all mankind, authentic mankind, made of faces that seem real, and in most cases they probably are, and that represent at the same time real men and women, and symbols, ancient legends, passed on by the people, taking their roots from religion, history, stories, mixing all up in a bowl of suggestions that are rich in charm and folklore.

The world of Neapolitan Nativities is the profane world of streets, taverns, workshops that is amazed by the myracle of Nativity. Shepherds, merchants, beggars, but also dwarfs, hunchbacks, the lowest among the lowest, all of them witness the Savior’s coming, who was born for them, to bring hope to all men with no exceptions. This is probably the true spirit of Nativity scenes, this wait, this mood of common celebration that makes all men the same for one night, all equelly witnesses of the ultimate Mystery. The Neapolitan Nativity scene is a joyful hymn to equality, to the universal right to rejoice and enjoy the light of Jesus become man.

Unique and unrepeatable pieces, worth of an art collection. Each statue is defined to the smallest details, from its base of terracotta, to the clothes in shaped fabric, created following ancient artisanal techinques to give them a sense of harmony and realism. The hand-painted faces are absolutely expressive and realistic, as the tradition demands.

The characters you can find in Holyart catalogue for the Neapolitan Nativity are many. There are of course the classic characters of Nativity: Baby Jesus, Mary, Joseph, the ox, the donkey and the Three Wise Men.

There is then a wider choice of shepherds, in various positions and behaviors, joined by sheeps covered in real wool, to give an even greater realism.

But the variety provided by Holyart is not over here, as the Neapolitan Nativity tradition demands. You will find statues representing any profession, sheep shearers, bagpipers, water carriers, chestnut collectors, bakers, weavers, farmers, fishermen, street musicians, and also the drunkards, the cat lady and the hunchback, pictoresque people typical of Naples folklore and now symbols of a humanity that goes beyond the centuries.

Besides the little statues representing people, there are many big and small animals, such as chicks and camels, to enrich your Neapolitan Nativity scene with countless details and animate small everyday life scenes.

The desire for realism that characterized the Neapolitan Nativity form its origing found a further evolution with the arrival of animated Nativities.

Also in this case, Holyart can boast a rich and varied catalogue of moving statues. Holyart statues are moved by motorised systems, and all of a sudden the whole scene comes to life, showing a working town, with farmers hoeing the ground, shepherds leading the herd, women sweeping in front of their doors, and so on.

Ancient actions, ancient professions, that are brought back to life thanks to the magic of tiny electric engines hidden among the folds of the clothes, handmade gears by artisans with a long expertise, to recreate a unique magic, a timeless atmosphere. Don’t you believe that? Look at the video here below, and you’ll think you can touch that extremely tiny, but really perfect, world with your own hands!

VIDEO OF A MOVING STATUE OF YOUR CHOICE!

Each statue is a unique piece to be collected, refined to the smallest details: clothes are sawn with real fabrics and the hand painted faces show great expressiveness.

So here we have the chair repairman for example, a moving statue 14 cm tall that represents an old artisan while he’s reparing a chair with straw. The character’s hand goes up and down thanks to the electric engine, simulating the movement in a very realistic way, and the serene expression of the old man is really priceless. Like all other statues of the Holyart Neapolitan Nativity, it is made of terracotta and dressed with fabrics. Clothes are shaped so that they respect the lines of the body and improve the feeling of movement and naturalness.

Another example that shows extreme realism is the snake charmer, a man sitting on the floor with his legs crossed, playing the flute to calm down a snake coming out from a vase in front of him. The statue moves to the right and to the left, with a very natural flow. Clothes, made of natural fibers, give that extra touch of realism to the scene.

The washerwoman washing clothes in the fountain is particular for the amount of details in the setting, besides her realistic movements. The woman is next to a small structure with a roof and real wooden beams, and a cork wall imitating red bricks. The clothes are hanging on a clothesline, while others that haven’t been washed yet are on the ground. On the edge of the basin there is a piece of saop that seems to be just put there by the woman’s achy hand. A warm light lights up the whole scene and water gushes out from the fountain thanks to a recirculating pump powered by an electric engine. A statue that is only 8 cm tall, but gains a whole life while immersed in this rich and redefined setting.