Ecclesiastic hierarchy within the Catholic Church 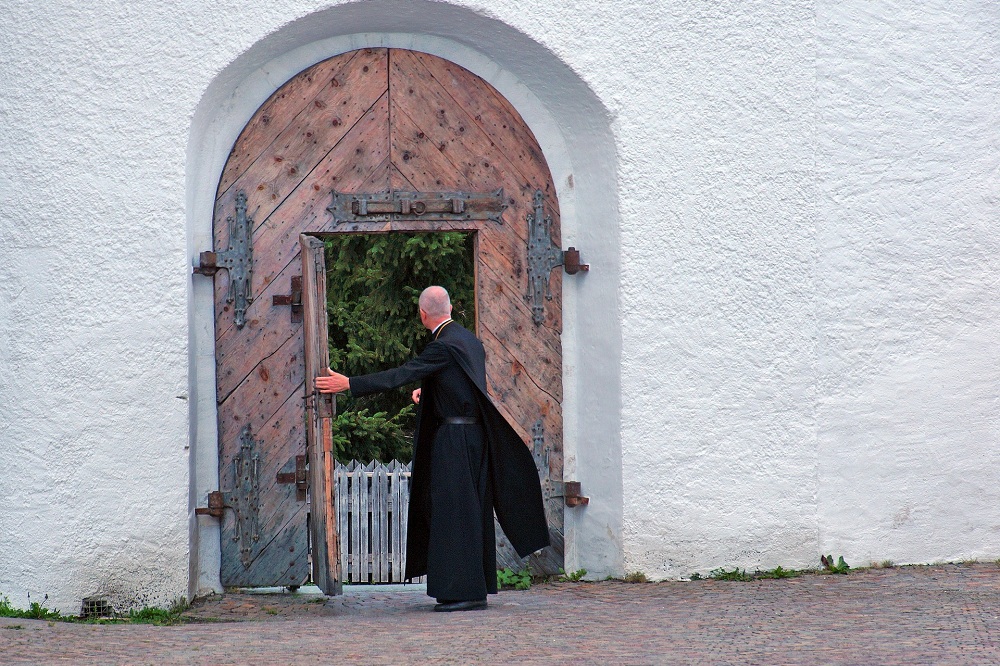 The Church is a very wide and complex institution, and, as such, it needs a well-defined hierarchy that has developed throughout time. Let’s find out something more about the ecclesiastic hierarchy within the Catholic Church.

First, what do we mean by ecclesiastic hierarchy? When Jesus founded the church, he developed it following the model of His community, his disciples and the many apostles. To some extent, this first hierarchical definition is still today the base of the hierarchy of the Catholic Church as we know it.

The Pope, bishop of Rome, is Saint Peter’s successor, designed by Jesus as the master and founder of the Catholic Church.

The Bishops, elected by the Pope, are the apostles’ successors.

Of course, as the Word of God spread throughout the world and the church with it, there was the need to create a hierarchical organization that could grant a detailed control on the territory and that would allow the Church to reach a greater number of faithful.

The Catholic ecclesiastic hierarchy as we know it today is the result of many councils and deliberations. Times changed and many events happened, therefore the church had to define a list of key figures, the ecclesiastical offices, which help the Pope and Bishop in their dutis of govern and care of Christ’s people. The word hierarchy comes from the two Greek words ‘hieros’, sacred and ‘archeia’, command.

The church hierarchy is based mainly on the faculty of the ordained of the various levels to administer the Sacraments or not, and on the power of intervention on a jurisdiction level, for example by electing a new bishop or entrust a priest with a new parish.

In a previous article dedicated to deacons, we already explained how the Second Vatican Council convened by Pope John XXIII in 1962, which lasted until 1965 under the guidance of Pope Paul VI, defined the modern organization of the Church and its ecclesiastical order. Clergy as we know it, and which include all those who received an Ordination, is made of three main ecclesiastical levels: Bishops, Presbyters and Deacons, which constitute the Church hierarchy.

At the top of the ecclesiastical hierarchy, we already mentioned the Pope as Bishop of Rome and supreme leader of the Church. His mandate is for life.

After him in importance, we find the Cardinals. All of the other bishops are considered as the apostles’ successors and are elected by the Pope, but some of them can rise to the office of Cardinals, always by his will.

What is the difference between bishops and cardinals?

Cardinals must help the Pope administrate the church. In order to do so, they meet in the College of Cardinals, or Sacred College. They have to participate in the conclave, the election of the new Pope. The typical color of cardinals is purplish red and the word we have to call them by is Eminence.

Bishops, on the contrary, receive their office through the episcopal ordination. Bishops, like presbyters and cardinals, retire at 75 years old. Their duties include guiding the dioceses, the ‘portions of God’s people’, that is, the territorial and administrative units that compose the Church, ordaining priests and deacons and administrating the Sacrament of Confirmation. Bishop can also administrate all Sacraments, including the religious Ordination. Their color is purple and can be called Monsignor or Excellency.

What is the difference between bishop and archbishop?

On the second level we find Presbyters, that is, the priests, also called parish priest if tied to a particular parish. The parish is one of the administration units of the Church. More parishes compose a vicariate; therefore a priest could also be a vicar, coordinator of all the parishes in the territory. Presbyters also retire at 75. Priests can administrate all Sacraments except for the religious Ordination, they can give the Eucharistic blessing and distribute the Eucharist to the faithful.

On the last level of the ecclesiastic hierarchy, we find Deacons, who assist priests and bishops during ceremonies. They can only administrate the Sacrament of Baptism and the matrimony, if they have a particular mandate. They preach the Word of God and offer their services to the parish communities. They can be married and have children.

Other ecclesiastical titles and offices are more or less specific, usually fulfilled by men that already have a position in the ecclesiastical hierarchy.

For example, the Apostolic Nuncio is some sort of ambassador, he represents the Holy See in a State.

A Catholic Primate is an honorary office assigned to a bishop or an archbishop who presides over an ancient or prestigious diocese or an archdiocese.

The Vicar general can represent the bishop in the management of the relationships between parishes and vicariates, the various districts a diocese is divided into, and in the matters concerning regional authorities, administration of ecclesiastical goods and jurisdictional matters. 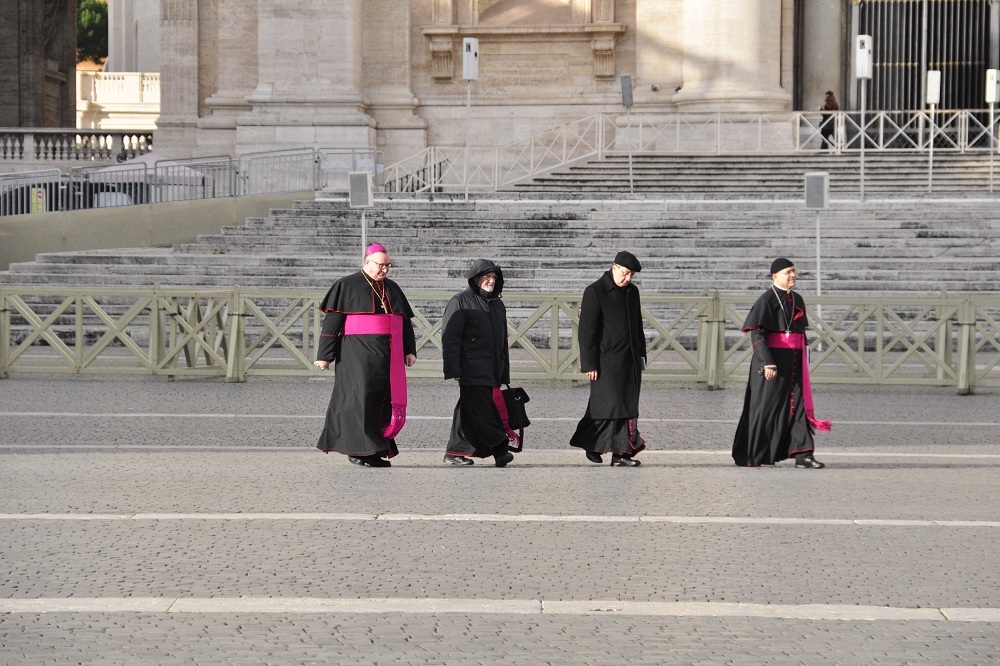 Clothing and colors of the various levels of the Church

Of course, depending on the level and the duties each man of Church has, there are different clothes and sacred criterions to follow. The ecclesiastical vestment is an obligation established by the Code of Canon Law, and since 1983, the Italian Episcopal Conference decreed the obligation of the cassock or the clergyman for everyone inside the clergy. Presbyters can just wear a cassock or a clergyman, maybe with other clothes and accessories. In particular, the sash is an accessory that allows people to determine the level of a man of church thanks to its color: black for priests, dark purple for Bishops and other prelates in general, marbled dark purple for Apostolic Nuncio, marble red for Cardinals, marble white with golden fringes for the Pope.

Clergy clothing: the simple elegance of the clergyman
Simple and sober: this is what we expect a priest to look like. Practical clothes that let people can immediately identify them.

Then, the saturno (Roman Hat), the typical black hat that Presbyters wear along with the cassock, decorated with bows that change color according to the religious levels of those wearing it: green for Bishops, red for Cardinals, red with golden decorations for the Pope.

There is also the cope, a long mantle with a small hood, almost down to the feet and open in front. Bishops and Presbyters wear it during solemn celebrations outside the Mass, and is fastened at the breast with a clasp that varies according to the ecclesiastical level.

Deacons wear the dalmatic, a long tunic with wide sleeves, which Bishops can also wear under their chasuble.

Buy Now:
Over 160 Copes, Roman Chasubles and Dalmatics
All handcrafted by hand in Italy
Related Posts...
Jubilee of Mercy Logo: what is it and who designed it
Eucharistic adoration for children