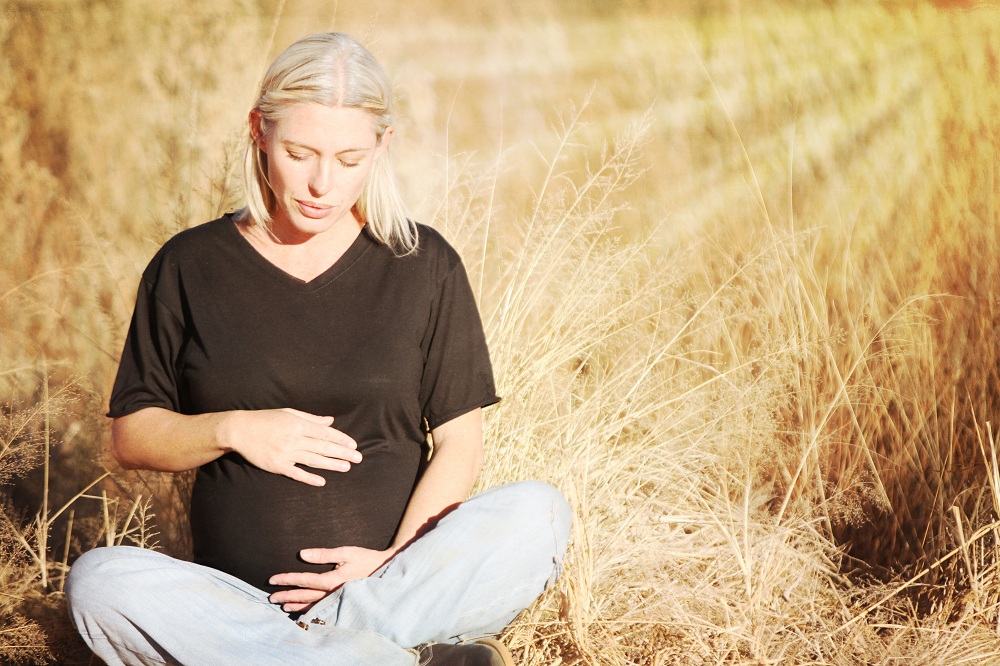 On May, we celebrate all mothers of Italy. A sweet, warm day that revolves around children, but not only. May is the month dedicated to mothers and to roses. But most of all, May is dedicated to the Virgin Mary, the most special among mothers.

The reasons to celebrate it in springtime is due to the celebration of the circle of natural rebirth after a long winter. What is celebrated is life principle, the return to life and its triumph, flowers and fruits typical of spring. In fact, an in-depth study would show us how the celebrations for Mother’s Day come from ancient pagan rituals, almost as ancient as humankind itself.

In Italy, Mother’s Day is celebrated on the second Sunday of May.

Mother’s Day is an opportunity to thank the person who brought us to life and takes care of us each day since the moment of our conception. Children especially feel this holiday; they put all their efforts in finding a wonderful gift for their mothers, usually crafted with their own hands, maybe even at school.

Besides drawings and crafts, all made with dedication and care, the young ones recite poems or sing songs. However, even adults honor their mothers on such special day with flowers, gifts or just their presence, an even more precious and rare gift nowadays, a time characterized by a constant frenzy and lack of time for what really matters.

What are the origins of Mother’s Day?

In Italy, a priest called Don Otello Migliosi was the first to celebrate such occasion in 1957 in the Umbrian hamlet of Tordibetto. Actually, the year before, Raul Zaccari, senator and mayor of Bordighera, had organized a special holiday dedicated to all mothers at Theater Zeni, which was later celebrated at Palazzo del Parco. The initiative was very successful from the beginning and spread all over the county, becoming a fixed day on the second Sunday of May.

In the United Kingdom, in 1700, Mother’s Day was celebrated on the fourth Sunday of Lent: all children that worked to earn some money to survive could stay at home all day with their mothers.

In the USA, Anna Jarvis was the first to celebrate her mother, an activist for peace, in 1908, setting the roots for Mother’s Day, which spread quickly and became very popular. So popular that in May 1914, at the orders of Woodrow Wilson, president of the United States, it became an official holiday. Later, the holiday reached many European countries, and not only.

May as the Marian month

We already mentioned the symbolism of rebirth and circle of life related to this anniversary, but for Christians there is something more that makes this day, and in general this month, a real celebration of the maternal figure. In fact, May has always been consecrated to Mary, mother of Jesus.

The tradition that ties the Virgin Mary to the month of May is nowhere to be found in the Sacred Texts. It took hold and developed throughout the centuries, with a sequence of initiatives and celebrations.
Only on April 29th, 1965, Pope Paul VI officially consecrated this month to the figure of Mary, with the encyclical Mense Maio, which says: “For this is the month during which Christians, in their churches and their homes, offer the Virgin Mother more fervent and loving acts of homage and veneration. And it is the month in which a greater abundance of God’s merciful gifts comes down to us from our Mother’s throne.”

Before that, Annibale Dionisi, a Jesuit who lived in patience, poverty and sweetness between 1600 and 1700, associated the month of May with Mary, inviting all faithful to homage her with ‘flowers of virtues’. The choice of May is probably related, at least in part, to the fame this month has, that is, watching nature and flowers bloom again, flowers that are always reminders of the Virgin Mary.

Already in the medieval age, philosophers from Chartres and Alfonso X the Wise, King of Castile and Leon, used to celebrate Mary as: “The rose among roses, flower among flowers, woman among women, the only lady, light of saints and skies.” The Dominican Henry Suso, who lived between 1295 and 1366, used to write about Mary as follows: “Be blessed, rising dawn, over all the creatures, and be blessed the flowery meadow with beautiful red roses of your face, adorned with the red flower of the Eternal Wisdom!”

At the same time, the tradition of the Rosary as devotional object dedicated to the Virgin Mary par excellence began to rise. The origins of the Rosary comes from the habit of decorating statues of Mary with garlands of flowers, especially roses, during the month of May.

In the XVI century, Saint Philip Neri used to invite the children he took care of to decorate the image of Mary with flowers and sing her praises. In 1677, the brotherhood called Comunella instituted the habit of dedicating the month of May to particular praises to Mary: “Having the feasts of May arrived and having heard many seculars the day ahead sing May and celebrate the creatures they loved, we decided we wanted to sing it to the Blessed Virgin Mary too…”

Mary, mother of all mothers

Who can embody the model of mother of all mothers better than Mary? A mother constantly suffers and prays for her children, is involved in their triumphs and their pains, which torment her with the same intensity they torment their children. No pain can be compared to a mother’s pain and, at the same way, no mercy can be compared to hers.

Mary suffered Her only child’s Passion in her own flesh, in her own soul, the same way any other mother suffers for the fruit of her womb, every day, anywhere.

Not just that. Mary is mother to all of us, to any man and woman that are born after her. Her love and her pain are strictly related to humankind existence. We owe the sweetest intercession to her and to her mercy that elevates us in front of the Father; she acts as a mediator for our prayers and our pains. No one loves us as much as she does, with the perfect and special love of a Mother.

Holyart proposes you 5 product from its catalog that are perfect gifts for Mother’s Day.

In order to remind you that May is the month of roses, besides being dedicated to Mary, a great gift idea are the Medjugorje rosary necklaces, decorated with ceramic roses and crystal beads (browse them in the gallery!) The beads shaped as roses are made of ceramic baked at low temperature, and each one of them is nestled between two crystal beads. The necklaces are handmade in Medjugorje.

Who your Guardian Angel is and what they do
Every one of us has a guardian angel, who accompanies us from the moment we’re born until the moment of our death…

What about an angel statuette as gift for your mother? It can be a sweet way to let her understand that this is how we think of her, our angel, and also a good wish for her, to let her guardian angel be next to her and watch over her every day, just as she watches over us.

Another option, a gorgeous crucifix in Murano glass. Truly wonderful objects, they are crafted following an ancient and fascinating art. They’re not just devotional objects, but real furnishing accessories that will make any home beautiful and elegant.

Murano (Venetian) glass: the making and its characteristics
Murano is a wonderful island that has been guarding the secrets of a unique and inimitable artisanal craft for centuries.

A different item to wear you can give your mother is a beautiful Tau pendant. We already talked about the Tau in an article dedicated to the different types of crucifixes. It is a symbol of salvation and the love of God towards men and women. In Holyart catalog, you will find Tau pendants made of wood, ceramic or metal, available in many colors and handcrafted. 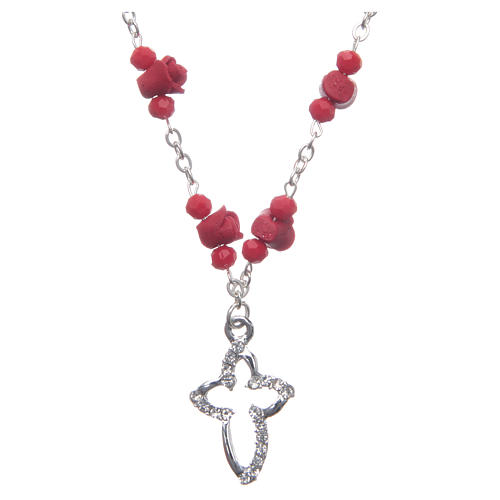 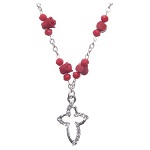 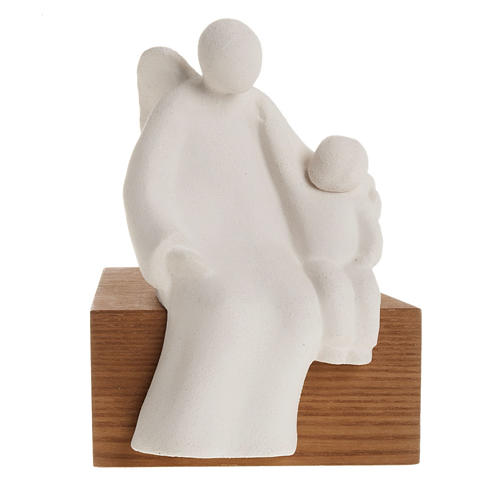 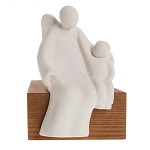 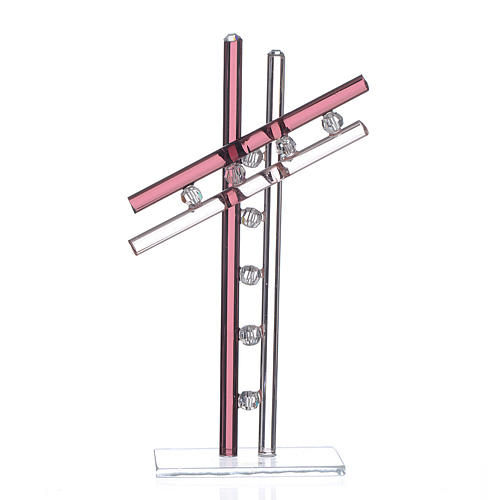 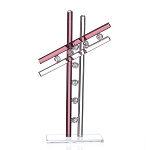 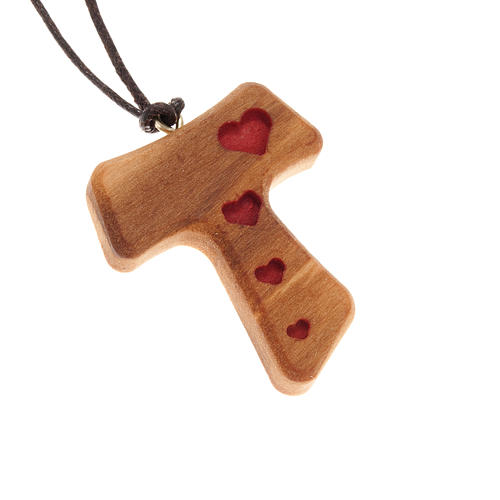 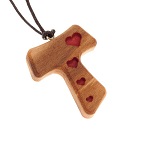 Pendant tau red hearts
Buy Now
Related Posts...
Giving alms: is it charity?
May is the month of Our Lady: how to celebrate the Marian month