Home » Saints and blessed » The night of San Lorenzo: the night of shooting stars 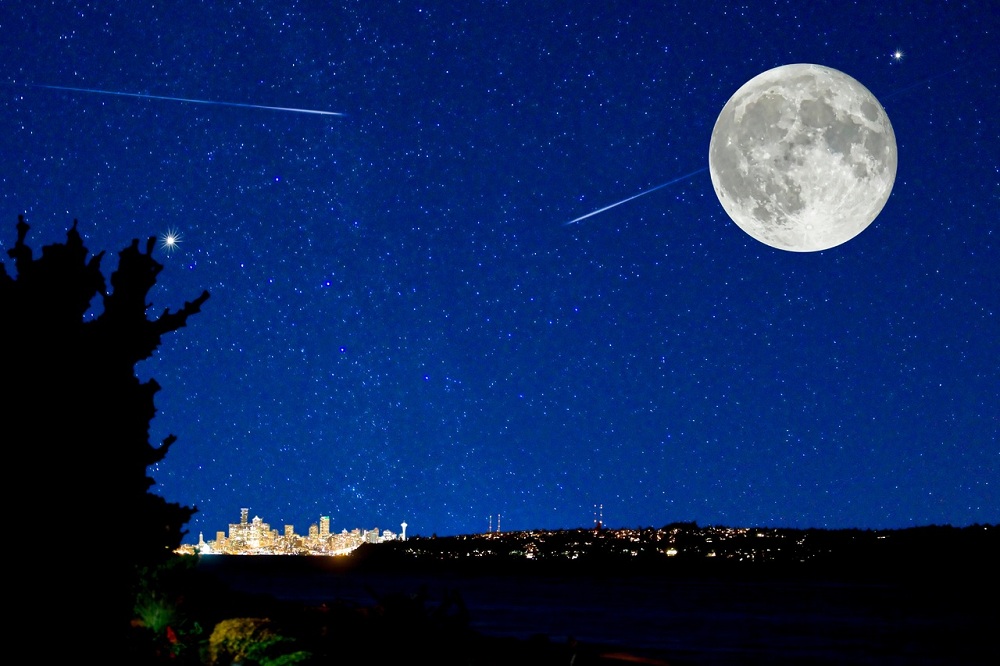 The night of San Lorenzo is awaited every year with trepidation by countless people. Some await it for astronomical interest, some because it is an exceptionally romantic night, some to express their devotion to San Lorenzo. But what makes this night so special from multiple points of view?

First of all, let’s try to understand if there is an association between San Lorenzo, a young martyr who died under the Roman emperor Valerian in 257 AD, and the shooting stars that characterise this special night.

Lorenzo was born in Osca, Spain, a town on the slopes of the Pyrenees. While attending humanities and theological studies in Zaragoza, he met the future Pope Sixtus II, who was one of his teachers. A friendship was born between the two made of esteem and mutual respect. In particular, the future Pontiff was able to appreciate the moral integrity of the young student, his charity towards the poorest and most needy.

Lorenzo and his mentor left Spain together for Rome and, when the latter was elected Bishop of Rome, he entrusted the task of Archdeacon to his friend and pupil. As Archdeacon, Lorenzo was in practise the first counsellor of the Bishop, and as such he had to watch over the purity of the faith and the discipline of the whole curia, but also manage the ecclesiastical properties. As the official representative of the Bishop, the Archdeacon also had to take his place on the occasion of visits to the sick and assistance to the neediest, such as orphans, widows, outcasts.

Lorenzo became a much-loved figure in Rome and even after his death he was the object of immediate popular veneration. It fell in 258 AD, under the emperor Valerian, who had promulgated an edict with which he sent to death all Christian bishops, presbyters and deacons. Pope Sixtus II was killed along with four of his deacons while celebrating the Eucharist in the catacombs of Pretextate. Lorenzo, who was 33 years old, was arrested and given into custody to a Roman centurion who, fascinated by the young man’s kindness, converted to Christianity and was killed in turn. Lorenzo was burned alive on the grill, which will later become his emblem.

San Lorenzo is the patron saint of librarians, cooks, booksellers, pastry chefs, vermicellai, firefighters, caterers and glass workers, as well as of the cities of Grosseto and Tivoli, of Sant’Agata li Battiati in the province of Catania, of Aidone in the province of Enna.

But what binds this young and beloved saint to the night of the shooting stars?

Meanwhile, we can say that, according to Christian tradition, the shooting stars that swarm across the sky on the night of August 10 are the embers that escaped from the flames of the grill on which the poor saint was burned. Another legend has it that they are his tears.

For the Greeks and many other pre-Christian peoples, shooting stars were divine signs. Their passage could even lead to the deposition of a king, as happened in Sparta where, in the ninth year of a ruler’s reign, a shooting star was sighted, he was forced to abdicate. The period of the greatest presence of shooting stars was then associated with fertility rites and propitiatory ceremonies to have abundant harvests.

According to the Romans, who celebrated Emperor Augustus in various ways in August, the shooting stars were the result of the ejaculation of Priapus’ phallus carried in procession or his tears. Since Priapus was the god of fertility, it was thought that this bright rain would make fields fertile. This theory linked to fertility would also justify the juxtaposition between this festival and San Lorenzo. In fact, the female counterpart of Priapus, the Great Mother who made the earth rich and fruitful, was also known as Larentia. The passage from Larentia to Lorenzo, and from Priapus’ tears to those of the young martyr, is understandable.

When is the night of San Lorenzo?

In reality, we know that the shooting stars visible even to the naked eye on the night of August 10 are the Perseids, or meteors composed of dust and ice, coming from the constellation of Perseus, which in this particular period of the year, between the end of July and the end of August, and in particular between 10 and 12 August, pass very close to the Earth. Therefore, August 10, the anniversary of the death of San Lorenzo, as well as an anniversary dedicated to him, coincides with the moment of greatest intensity of this meteor shower.

Poem about the night of San Lorenzo

We mentioned how, in ancient times, the shooting stars that fall from the sky on the night of 10 August were considered the tears of Priapus, god of fertility and, subsequently, those of San Lorenzo martyr. The great Italian poet Giovanni Pascoli wanted to take up this symbolism of shooting stars as tears in his immortal poem X August dedicated precisely to the night of San Lorenzo. The choice of this date is not accidental. On 10 August 1867, Pascoli’s father was murdered by a shot fired by unknown persons as he was returning home to his family. This tragic and painful event irremediably marked the poet, who in his production dedicated many verses to the incident, as in one of his most famous poems, La cavallina storna, or precisely as in 10th August, where the sky itself burns and cries, flooding the Earth, bitterly defined as an “opaque atom of Evil“, an impotent witness to the umpteenth injustice done by men.

San Lorenzo, I know it because so many
stars for the calm air
and falls, because such a great
planet in the concave sky sparkles.

And you, Heaven, from the top of the
planet earth, infinite, immortal,
oh! this opaque atom of Evil floods him with a weeping
of stars!

Phrases for the night of San Lorenzo

Even if we don’t have the evocative power of Pascoli, we are all fascinated by the shooting stars that rain down from the sky on August 10, giving life to one of the most magical and romantic nights of the year. Poets, writers, but also film authors, even comedians, have uttered phrases dedicated to the night of San Lorenzo that have remained famous and that can be mentioned on this occasion, perhaps to impress those we like!

For example, the sentence pronounced by none other than the Greek philosopher Plato will certainly be effective: “You look at the stars, my star, and I would like to be the sky to look at you with a thousand eyes.” Who can resist such a declaration of love?

Bittersweet, as his work often was, Oscar Wilde’s assessment: “We are all immersed in mud, but some of us look to the stars.” No less poetic was the great French novelist Victor Hugo: “The soul is full of shooting stars.”

The Italian music scene offers many examples of songs in which the shooting stars of San Lorenzo are mentioned:

I see the eyes of a woman who loves me
; And I no longer feel the need to suffer
; Everything is illuminated
; Everything is in its becoming ray
; I see stars falling in the night of desires
Lorenzo Jovanotti

I hate people who hate rain and wind and only look at the sky on the night of San Lorenzo.
J-Ax

And even the stars fall, some both outside and inside,
for a wish you make another hundred remain outside!
Ligabue

But aside from the romance, there are also many funny quotes about the night of San Lorenzo. On the Internet there are many, for all tastes, such as those of the influencer Fran Altomare: “Meanwhile, in a parallel universe, the stars make a wish as soon as they see someone stumble.“, Or the aphorisms on the Night of San Lorenzo by the author of aphorisms on Twitter Twilla_ria: “The wish did not come true. It was a shooting star.”

We have already mentioned how several singers have mentioned shooting stars in their song lyrics. But some went further and dedicated a song to the night of San Lorenzo. For example, the singer Franco Simone wrote a song entitled Notte di San Lorenzo, which tells of a nocturnal and solitary journey that the singer-songwriter makes in this magical night, and of an encounter that would change his life:

A thousand lights between the fingers,

ten stars come back to fall,

to understand the whole night,

they want mountains of love

Even Murubutu, stage name of Alessio Mariani, founder rapper and voice of the Reggio-based collective La Kattiveria, dedicated a song to the night of San Lorenzo. His was a daring experiment, but the singer is used to combining hip hop with literature, history and philosophy, creating what he calls “literary-inspired rap” or “literaturap“.

And at the feast of the Saint known throughout the Sila
So many people also came from the cities
Under a black ink, moon in the sky and ivory We
searched in the dark, among the lights of the cosmos
Seekers of comets in the scattered
fiefs Thieves of Perseids in the August sky

The Night of St. Lawrence

Even the cinema has been infected by the fascination that has always been exercised on men by this magical August night. The Taviani brothers in 1982 shot the splendid film The night of the Shooting Stars, set in the Tuscan countryside in August 1944, it tells the dramatic events of men and women overwhelmed by the madness of the Second World War, between acts of heroism of the Resistance and the foul reprisals of the fascists.