10 liturgical lectern covers for your church 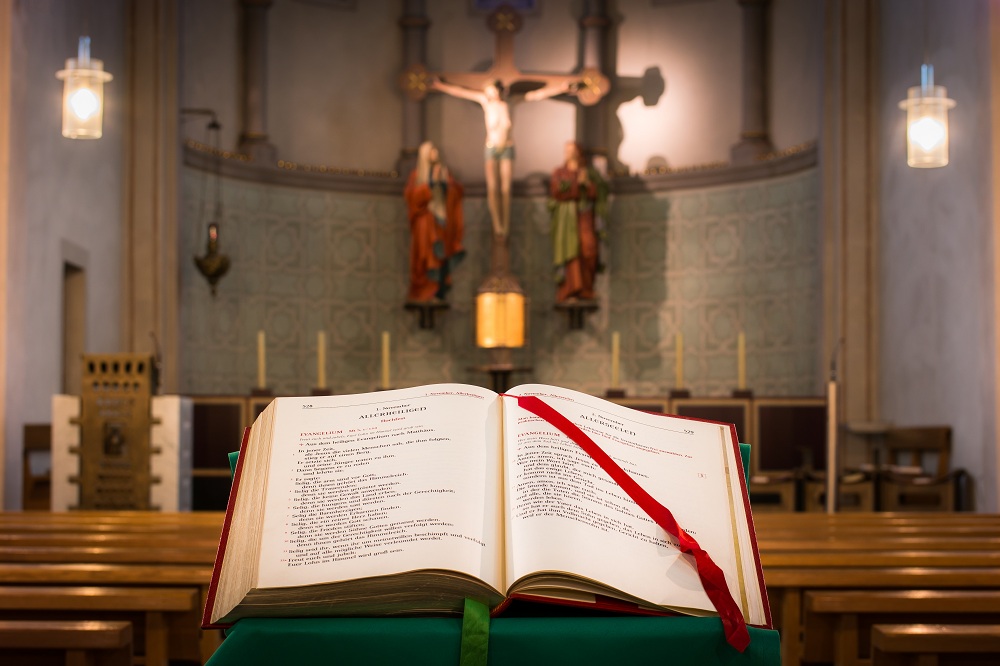 Nothing in the liturgy is left to chance. Every gesture, every word, every object contributes to creating the celebratory context where the priest and the faithful move, pursuing the same mystery, alone, from two different points of view. It is only this common tendency to the mystery par excellence that makes possible the renewal, day after day, mass after mass, of the sense of religiosity typical of the Christian faith. But, for this common ritual to be truly effective, everything that composes it must perform its role optimally.

This is why sacred furnishings and liturgical furnishings are so precious and important. Their fixed forms, codified over time, are an integral part of religious expression, no less than the liturgical formulas, prayers or gestures that make up the ritual. And, just like words and gestures, sacred furnishings also tend to be as simple and recognisable as possible, accessible to all, because the efficacy of the Christian message lies precisely in simplicity.

Thus even an apparently banal object, such as the liturgical lectern assumes a role of primary importance, it is precious, necessary for the rite to be carried out in the best possible way. The lectern cover serves, as its name suggests, to cover and decorate the lectern on which the sacred texts are placed during mass and various celebrations. It can also be used to adorn the ambo, the elevated structure from which the Word of God is spread.

Plexiglas or wooden lecterns? Your commodity is priceless
Have you ever been fascinated by a wooden lectern holding a ponderous, ancient tome?…

As has always been the case with all other sacred furnishings, the refinement in the cut and decorations, the choice of fabric, the precious, precious materials used to make an embroidered lectern cover, or an ambo cover, are part of the ritual, they enhance the importance, solemnity, nobility, beyond any symbolic expression.
The very realisation of the lectern cover, which follows traditional designs, simple yet made complex by the value assigned to them over time, gives this object a precise theological meaning.

Obviously, as for all sacred furnishings, if at one time even the lectern covers were considered precious objects, which required the use of precious materials, to be packaged, today it is also easy to find cheap lectern covers, in synthetic fabric, which however retains all the spiritual value with which these objects must be invested. Think for example of the Franciscan lectern cover, simple, often devoid of decorations, or which at most has the symbols of the Franciscan Order embroidered or printed, such as the Tau or the arm of Christ that crosses that covered by the habit typical of the Order, with a beaming cross in the background.

Even the Neocatechumenal Way, always so attentive to symbols and objects, has relaunched the importance of the lectern cover not only as sacred furniture in churches but also as a precious accessory in the home of every faithful, to better guard the Holy Scriptures. We recall that the Neocatechumenal Way was born in Spain in 1964, as an instrument to rekindle faith in those who have lost it, or in those who have not been able to cultivate it adequately for various reasons. This movement was based on the primitive church, and initially addressed the marginalized, gipsies, vagabonds, prostitutes, immigrants, often illiterate, to bring them the message of hope of the risen Christ. Today the Neocatechumenal Way has been officially recognised, by John Paul II, and, subsequently, also by Benedict XVI, and it gathers more and more followers. Its purpose is to spread a new approach that allows you to experience the Gospel in-depth, but also compatibly with the needs of the contemporary world. With this purpose, the Neucatechumenal Way has become an instrument that supports and assists parishes in the work of recovering those who have strayed from the faith or have never approached it but would like to do so, like those who have been baptised, but then left the church, those who want to grow on the path of faith, those who have not followed the catechism, but also priests who want to enrich their spiritual path. In this context, the Neocatechumenal lectern becomes an instrument for enhancing the sacred texts, but also for approaching the Scriptures, for its symbolic value and its strong link with tradition, but also for the visual stimuli it can offer.

Naturally also the lectern cover, like all sacred vestments and fabric furnishings used in church, is affected by the symbolism of liturgical colours and is replaced according to the period of the liturgical calendar in which it is found. Here is a brief scheme for deciphering the colours of the lectern cover on various occasions:

Precisely because the lectern cover is such an important and precious sacred piece of furniture, it is important to find one suitable for every occasion. Below we suggest ten, which you can find in our online store. Quality products, all made by Italian companies with selected fabrics, enriched with decorations and embroidery, which make them objects of great value and elegance.

Related Posts...
Why is Jesus on the cross such an important symbol for Catholics?
The transfiguration of Jesus Christ