The transfiguration of Jesus Christ 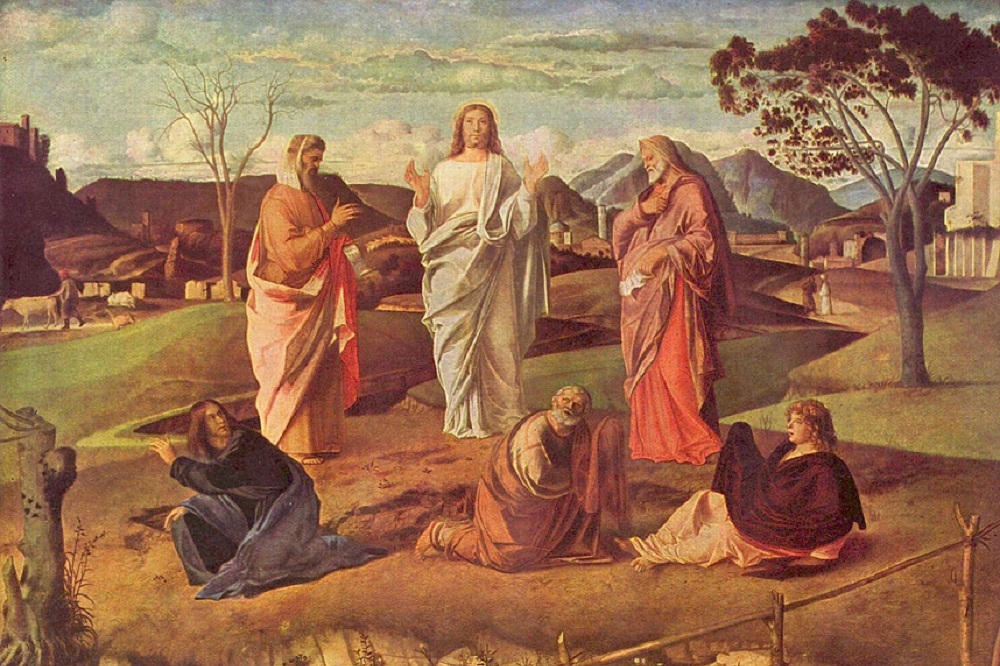 It would therefore be a sort of transformation, which changes the appearance of something, or someone until it is different from what it previously appeared.

In this case, the transfiguration of Jesus celebrated by the Church on August 6 concerns a miraculous transformation of Jesus, before the eyes of three of his disciples: Peter, James and John.

This episode is mentioned in three of the four so-called synoptic Gospels: Matthew 17,1-8; Mark 9: 2-8; Luke 9: 28-36. In short, Jesus, Peter, James and John had withdrawn from the other disciples and climbed a high mountain to pray. Suddenly, during the prayer, Jesus changed his appearance. His face and body had begun to glow and his robes had turned a dazzling white.

Soon after, two mysterious men, who turn out to be Moses and Elijah, appear in the same place and start talking to Jesus. Peter offers to erect three huts for Jesus and the two Prophets, but a voice comes from a luminous cloud and urges the disciples to listen to Jesus, as his chosen and beloved Son. The three disciples at this point were overwhelmed, and when they recovered the prophets and the cloud had disappeared, and they remained on the mountain with Jesus.

The account of the Transfiguration of Christ is rich in prophetic and messianic suggestions, which have made scholars debate for a long time about its actual historical truthfulness. In fact, it is one of the few occasions when Jesus manifested himself in his divine nature, presenting himself to his companions as the Son of God. There had already been precedents, in particular, the Baptism of Jesus, when, after John, the Baptist had baptized him, the sky had opened and the Holy Spirit had descended like a dove announcing the identity of Christ: “And immediately, coming out of the water, he saw the heavens tear apart and the Spirit descending towards him like a dove. And a voice came from heaven: “You are my beloved Son: I am pleased with you“(Mark 1:9-11).

Subsequently, it will be Jesus himself who will confirm his identity as the Son of God, when, on the eve of the Passion, retiring to the garden of Gethsemane, he will pray calling God the Lord: “My Father if this cup cannot pass by me without my drinking it, thy will be done.” (Matthew 26:41).

The theme of transformation, of the dazzling splendour that invests those close to God, recurs in many other passages of the Holy Scriptures, in particular concerning the Apocalypse, when all will be judged and those who deserve it will be saved.
Those who are wise will shine like the brightness of the heavens, and those who lead many to righteousness, like the stars eternally”. (Daniel 12:3)
“And all of us, with our faces uncovered, reflecting the glory of the Lord as in a mirror, are transformed into that same image, from glory to glory, according to the action of the Spirit of the Lord.” (St. Paul to the Corinthians 3:18)
Of course, the splendour that springs from Jesus is also an anticipation of his Resurrection and celestial glory, as well as the whiteness of his robe.

Other elements of the account of the Transfiguration of the Lord also make us understand its evocative and symbolic power.

Moses and Elijah represent the will to refer to the Jewish tradition and the prophecies on the coming of the Messiah contained in the Old Testament. Always linked to the ancient tradition are the three huts that Peter offers to build, which refer to the camp of the Jews at Mount Sinai when Moses received the tablets of the law, and which were remembered by the Jewish people with the Feast of Booths, and etc.

The shining cloud from which the voice of God emerges is a recurring element in theophanies or the apparitions of the divine among men.

There are significant differences between the three Gospels that recount this episode, linked to the different theological vision of the three evangelists. These differences also contribute to emphasising the messianic and symbolic dimension of the Transfiguration.

The mountain where the transfiguration took place

There are several conjectures as to which Mount of the Transfiguration was, on which Jesus and his disciples went up that day. It is probably a symbolic mountain, not a real one, like other similar places, such as the one mentioned in the Sermon on the Mount (Mt 5:1).

Some traditions have instead identified it with Mount Tabor, a rounded and isolated hill that rises in the plain of Esdraelon. Here the Byzantines had three churches built and, subsequently, Benedictine and Franciscan monks took turns, building other places of worship. In 1924 the basilica with three naves was inaugurated, designed by the architect Antonio Barluzzi.

Mount Hermon, north of Caesarea Philippi, not far from the headwaters of the Jordan River, was also considered by many to be a possible setting for the Transfiguration.

The interpretation of St. Augustine

St. Augustine provides his own personal and fascinating explanation of the Transfiguration of Jesus in Discourse 78, describing how the white clothes of Jesus are a symbol of the Church and its splendour an omen of Salvation. In the Transfiguration, he presents himself as the light that illuminates every man who comes into this world, shining with a light similar to that of the sun, but which can be perceived with the eyes of the soul and the heart. His very white clothes are his Church because whoever serves the Church can see all his sins washed away, and he will always appear dressed in immaculate splendour.

Augustine also speaks of Peter, of his not knowing how to face the vision of the transfigured Jesus except by proposing to build a house for him and the two prophets. In reality, Peter’s desire to please Jesus stems from the fact that even he would never want to leave the mountain, where he can enjoy the splendour of Christ without having to worry about others. But Peter, limited by his human vision, does not realise that where he wants to build three tents, only one would be enough, because: “Christ is the Word of God, Word of God in the Law, Word of God in the Prophets. Why, Peter, do you try to divide him? Rather, you shall remain united with him.” Peter will have to understand that he will not be able to enjoy the luminous presence of Christ until after death and that for this reason, he will have to dedicate his life to charity and love, to deserve to be able to remain Him again, in the light.

The voice that comes out of the cloud places Jesus in a higher condition than the prophets, as they had written the laws and spoken of His coming, but now He was present, real, the Son, the source of all Salvation. Moses spoke with God, in the burning bush, and from him, he received the Law. Elijah proclaimed the coming of the Messiah, with such ardour that he deserved to go up to heaven in a chariot of fire. But Jesus is the Law, he is the Messiah, and his greatness and splendour are unattainable.

When is it celebrated and why?

As we have already mentioned, the choice to celebrate the Transfiguration on 6 August derives from the fact that it would have taken place forty days before the crucifixion of Jesus, which was celebrated by the Eastern Church on 14 September with the Exaltation of the Holy Cross. In the West, the celebration of the Transfiguration began in the 9th century.

The Transfiguration explained to children

How can an important event of immeasurable symbolic significance be explained to a child? It’s not easy, but it can be done. Wanting to adapt the story of the Transfiguration for children, we can say that Jesus, Peter, James and John went to the top of a mountain one day to pray together. At a certain point, Jesus lit up everything, he began to shine like the sun, his clothes became as white as snow. His friends saw his face change and, in addition to the human face, they saw the divine face and knew they had the Son of God before them.

But that’s not all. After Jesus began to shine like a star, Moses and Elijah also appeared on the mountain, two very important characters for Christians, because Moses was the one who saved the Jews by leading them out of Egypt and received the tablets with the Ten Commandments, and Elijah proclaimed the coming of Jesus with all his might. These two great men begin to chat with Jesus, before the increasingly incredulous eyes of the disciples.

And it is not over yet. From a shining cloud in heaven came the voice of God who said: “This is my beloved Son: in Him, I am pleased. Listen to him.”
At this point Peter, James and John were overcome with emotion and fell to the ground, but Jesus immediately rushed to reassure them, to tell them that everything was fine. Because they were his friends, and he took care of them, as it should be.

What does this passage from the Gospel mean? It teaches us that each of us, in every moment, can be like Jesus, show the light within, show others how much God’s love makes us shine and shine. Because we too, like Jesus, are children of God, and if we follow his example, if like him we are kind and caring towards our friends if we love our loved ones and those around us with all of ourselves, we can transfigure ourselves and shine like stars! This is the secret of the transfiguration, letting others glimpse a little bit of the light that blurs within us.

Representations of the transfiguration of Jesus

The Transfiguration recurs less than other sacred subjects in sacred iconography, but it has not failed to inspire many great artists. Representations of this miraculous event are found in both Eastern and Western art. Many splendid Byzantine icons have the Transfiguration as their subject, as well as marvellous mosaics, such as that of the Monastery of Santa Caterina sul Sinai, or that of the Palatine Chapel in Palermo, or the allegorical Transfiguration in the mosaic of the apse of Sant’Apollinare in Classe a Ravenna.
Great Italian painters such as Beato Angelico, Raphael, Perugino, Bellini and Titian left frescoes and paintings on the transfiguration of Jesus.
In more recent times the artist Marko Ivan Rupnik created an impressive mosaic for the church of Santi Giacomo e Giovanni in Milan.

Related Posts...
10 liturgical lectern covers for your church
October: the month of the Holy Rosary