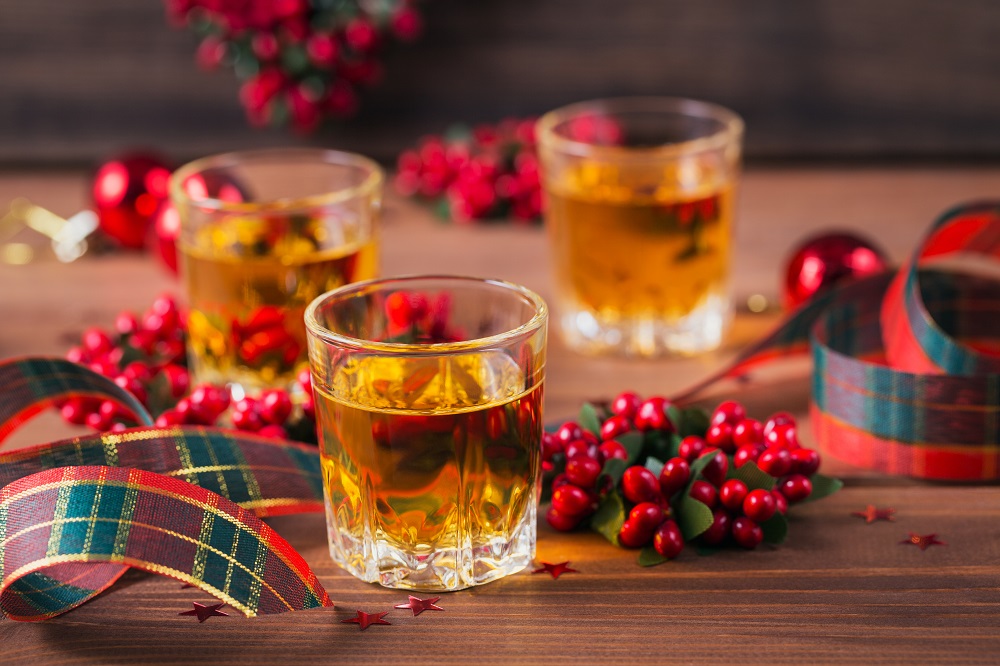 Christmas, a time for binges in the company of others, but also for long evenings and lazy afternoons to spend with friends and relatives. What’s better than liqueurs and digestives to sip to aid digestion and keep warm?

The ammazzacaffé (literally coffee-killer) is a typically Italian custom. It consists of closing lunch or dinner with a glass of liqueur or digestive bitter. The name derives from the belief that the flavour of this drink worthily concludes the meal, especially if it has been abundant and varied, eliminating all the flavours and helping digestion.

Beyond the actual benefits that liqueurs and digestives can bring to the body, which we will discuss later, it remains true that this tradition is very pleasant, especially when accompanied. The Christmas holidays are an ideal occasion to perpetuate this tradition because they include many convivial occasions, and the consumption of particularly heavy and ‘demanding’ foods. In addition, we spend more time around the table, with friends and relatives, chatting, picking dried fruit and nougat, forgetting the problems and rhythms of normal life at least for a few days.

Buy Now:
Liqueurs, Grappa and Digestifs
Liqueurs produced with natural methods by the monks and nuns of different Italian monasteries.

Let’s try to explain the differences to clarify things. It is appropriate to establish the difference between liqueurs, bitters and distillates and between the different processing methods used to produce them.

The liqueur is an artificial solution composed of vegetable elements combined with alcohol of agricultural origin, or cold macerated or hot infused and then enriched with aromas and a high percentage of sugars. Sugar syrup and water are mixed to obtain the right alcohol content. Since the Middle Ages, liqueurs were used in our country with a curative function.
How it is produced: liqueurs are produced by mixing cold or hot substances extracted from herbs or fruit dissolved in a solution of water, sugar and pure alcohol. The aromatic vegetable substances can be left to macerate in alcohol, and in this case, we refer to infusions or prepared with concentrated essential oil dissolved in alcohol.
Examples of the liqueur: Grand Marnier (obtained from oranges), Maraschino (obtained from cherries), Amaretto (obtained from almonds), Limoncello (obtained from lemons), Rosolio (made from rose petals).

The amaro or bitter is always based on vegetable substances, which are distilled, macerated or mixed with alcohol or alcoholic distillates, to obtain mainly bitter drinks. Amaro has always been used for its eupeptic properties, but also as an aperitif or digestive.
How it is produced: the preparation of the amaro takes place in two phases: infusion and distillation. For many months, ground, pulverized herbs and roots are immersed in a hydroalcoholic solution are left to macerate. Subsequently, the infusion thus produced is decanted and mixed with the isolated liquid through the distillation process which allows separating the volatile components of the fermented substance according to their different boiling point, to concentrate the ethyl alcohol produced by fermentation and separating good substances from useless ones.
Examples of amaro: Petrus Boonekamp, Jägermeister, Unicum, Fernet Branca.

Finally, the distillate is obtained from the fermentation of vegetable juices obtained from cereals, roots, tubers, fruit or wine in alcohol, and from their distillation without adding sugars or aromas. Even the Babylonians and the ancient Egyptians distilled wine and cider to obtain stronger drinks. The knowledge of this particular process was later passed to the Arabs, and from them in the 10th century to the Salerno medical school, which began to use the wine brandy as a drug.
How it is produced: the distillate is obtained by distillation in the alembic of a fermented substance, without adding sugar and aromas. The various stages of processing include the preparation of the must, which is fermented with yeasts, and the actual distillation. Some spirits also require a stabilisation and ageing period. Examples
of spirits: vodka, grappa, brandy, gin, rum, tequila, whiskey.

Liqueurs and digestives in the monasteries

European liqueur art finds its cradle in Benedictine monasteries and abbeys. It is well-known how religious communities have always distinguished themselves in the study and manufacture of medicinal and medicinal products, but not only. For a long time, for example, beer was their monopoly, just as the monasteries that had vast land planted with vines distinguished themselves in the production of wine. The monks who lived in those places of silence and knowledge collected the ancient techniques from Egypt and developed by Islamic alchemists and, thanks to their knowledge of plants, began to use herbs, roots, leaves, tubers, mixing them with alcohol to extract active ingredients with extraordinary therapeutic properties. If for many centuries these preparations were intended only for medicinal purposes, from the 19th-century liqueurs and bitters began to be known and appreciated only for their taste, as well as for their digestive, tonic and balsamic properties.

Even today in many monasteries liqueurs, grappas, digestives are produced according to natural methods. Monks and nuns contribute to the production and sale of liqueurs and digestives to the sustenance of the monastery itself. We have already spoken in other articles of the genuineness of monastic products, of their attention to the well-being and health of consumers, but also of the profound respect for the environment in the choice of processing. Think of the delicious jams and marmalades produced by the monks of Camaldoli or the Trappist Nuns of Vitorchiano, or the excellent beers made in the monasteries.

Holyart natural jams: tasty, simple and genuine
Natural jams are guarantee of quality and genuineness. In a world torn between junk food and the obsession for organic food, where can we find real…

Liqueurs and digestives as a gift idea

Give a good liqueur or an amaro as a gift? Might as well. If your choice is a quality product, the gift will certainly be appreciated. Of course, it is wise to make sure that the recipient appreciates alcoholic beverages! A good amaro or a pleasant liqueur brings together men and women, who often appreciate the sweeter and more flavoured liqueurs. If you want to make a good impression, choose a large format, perhaps with a nice bottle, and focus on a product of a good brand, or of prestigious origin, as one of the many excellent products made in monasteries, still following the ancient processing techniques handed down over the centuries.

5 gift ideas for Christmas: for him and her
Christmas is approaching. Do you already know what to give to your loved ones? Christmas shopping anxiety? Here are…

How to choose liqueurs and bitters?

The choice is certainly linked to personal taste, based on the herbs and aromas used in the product’s creation. The liqueurs, given the high concentration of sugars, tend to be more palatable and appreciable even for those who are not used to drinking alcohol. Even flavoured grappas, despite their high alcohol content, can also be appreciated by less accustomed palates. The fundamental thing in choosing a liqueur or an amaro is the quality. On the market, there are countless products made with artificial flavours, dyes, additives of all kinds, to be more pleasant in flavour, but without any consideration for the final effects on the body.

By way of example…

Nocino, Laurus48,  Lacrima d ‘abeto and Elixir dell’eremita are still produced in the Camaldoli monastery, all with tonic and digestive properties, obtained by cold infusion from various medicinal plants collected in the monastery area. If you are looking for a low-alcohol digestive liqueur, Camaldoli also produces rhubarb amaro, slightly bitter, handcrafted by hermit monks according to their ancient recipe that combines the properties of various herbs with the digestive ones of rhubarb root. The distillery La Baita dei Padri Benedettini of the Abbey of Finalpia, in Liguria, also produces excellent distillates of fine pomace, such as the artisanal Grappa aged in oak barrels, aged and available in different variations, or the excellent Lemon Elixir obtained from the infusion of lemon peels.

Liqueurs and bitters are often excellent digestives, especially when the elements that compose them are natural digestives. The bitters and liqueurs made with digestive plants stimulate the secretion of saliva and gastric juices, and in this way facilitate digestion. Drinking a small glass of Amaro before a large meal will prepare the digestive system to receive the food and digest it more quickly. Bitters also stimulate bile secretion and the expulsion of intestinal gas. Of course, you have to choose the bitters produced with the right herbs. We think of the artichoke, gentian, rhubarb, myrtle, china not surprisingly used as basic ingredients for many famous bitters. Ginger, wormwood, bitter orange and citrus peel are also famous for their digestive properties because they irritate the stomach’s mucous membranes forcing them to produce more gastric juice.

However, the alcohol content must also be carefully evaluated. While it is true that the aroma and taste of herbal bitters stimulate the taste buds and increase salivation and the secretion of gastric juices, as does low alcohol. Excessive alcohol content has the opposite effect, irritating the walls of the stomach and slowing digestion. The ideal is to move towards a liqueur or a bitter that has a low alcohol content, around 10-14 °.

Among the undesirable effects of the consumption of liqueurs and bitters, we must then consider the caloric intake of these drinks. It is not only the presence of sugar that makes them unsuitable for those with weight problems or who must follow a low-calorie diet. Alcohol, in general, makes you fat due to its effects on body chemistry and hormones.