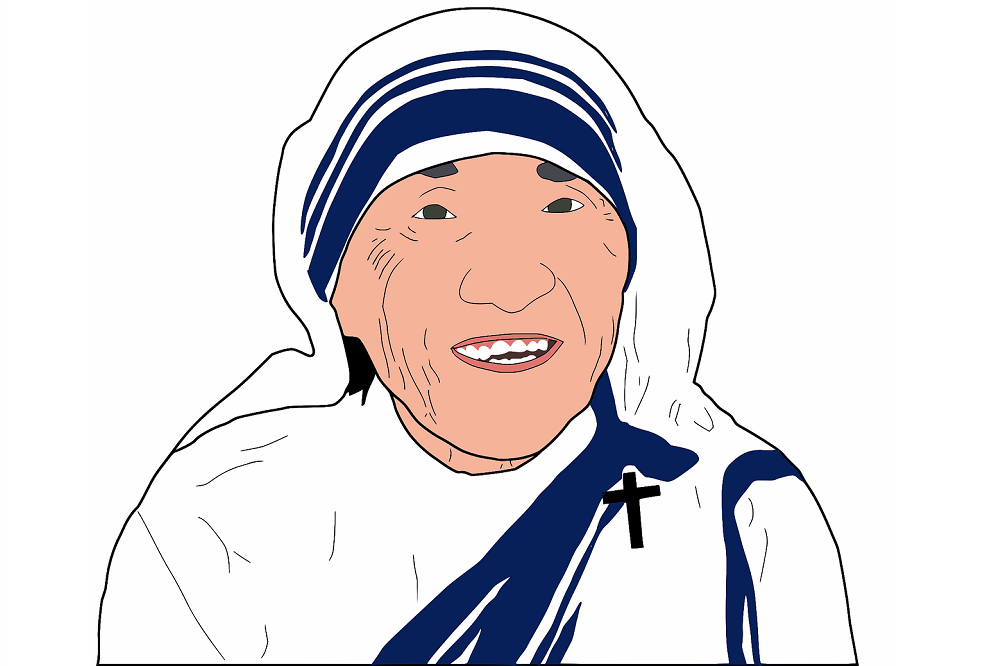 A new year has begun. Time for budgets and good intentions. What if our most important and sincere purpose was charity towards others? Mother Teresa of Calcutta was a master in this.

Why start the year by talking about Mother Teresa of Calcutta? The holiday season predisposes each of us to reflect on many aspects of life that we tend not to dwell on too much during the rest of the year. Perhaps it depends on the dilation of time, which characterises these days different from all other days. Perhaps it is the closeness with friends and relatives, even with people we don’t usually frequent, for lack of time, for distance.

Modern life is strange, often even cruel. Even Christmas, in our cities, seems to lose its connotation as a religious holiday, reducing itself to an occasion of consumerism and waste. The sparkling lights in the shops, the lights that light up the streets, should remind us of the birth of Jesus, the immense gift that God gave us by sending His Son to live among us, to die for us. Instead often, too often, those lights are just an invitation to buy, to give even expensive gifts that too often are not gifts, because they do not come from the heart. The same feeling of warmth, of ‘feeling better’, too frequently remains a superficial manifestation, which does not manifest itself in any way. We eat, drink, exchange gifts, and then we all return to our lives, in which there is no room for those around us, let alone for those who are just farther away from us.

Yet Christmas makes us think, and fortunately. Because for those who truly believe it is the moment in which more than at any other time of the year we can and must welcome the love of God. But that’s not all. At the very moment in which this unique and special love enters our lives and our homes, we become its instrument, small but precious voices, in a choir that sings of justice, peace, truth, for all the men of the world.

Above all, the renewal of the miracle of the birth of Jesus, of that pure and innocent Child in the presence of whom shepherds and Magi bow in the same way, should awaken the best part of us, which Christian theology has wanted to define with theological virtues, that is, those virtues that should be at the basis of Christian living and of the relationship of every man with God.

In the first letter to the Corinthians, we read: “These then are the three things that remain: faith, hope and charity; but the greatest of all is charity!“(1 Corinthians 13:13).

Here are the theological virtues: Faith, thanks to which man entrusts himself completely to God, believing in all that He has revealed; Hope, or trust in the promise of eternal life and the commitment to live in a way that deserves it; Charity, the bond and point of departure, but also arrival, of the other virtues. We want to focus on the latter in this article.

So, what is charity

We have already dealt with the concept of Christian charity previously, reflecting on how it should not be confused with the simple act of giving alms.

Charity is the virtue in the name of which man loves God above all else, and his neighbour as himself.

It is Jesus himself who communicates this new commandment to his disciples:
“At that time Jesus said:” Now the Son of man has been glorified, and God has been glorified in him. If God is glorified in him, God will also glorify him in himself, and he will glorify him immediately. Children, I am with you for a little while longer. I give you a new commandment: love one another. As I have loved you, so you also should love one another. This is how all will know that you are my disciples if you have love for one another.” (Jn 13: 31-33a.34-35)

Charity is therefore before anything else love. Love for others, for those who are close, but also for those who are not, but need our help, our love. A love that must be free, authentic, offered and lived in the name of Jesus, with a smile on the lips and a light heart full of happiness.

For this reason, speaking of the difference between charity and almsgiving, we focused on the fact that too often the latter is mistaken for a gesture of love and generosity, while unfortunately, it is only a way to feel a clear conscience, with the least possible effort. Charity is not just giving a few coins that weigh in our pockets. It is welcome, availability, the will to find time and energy to dedicate to others, taking them away from ourselves, sacrificing what we like to do and having to put ourselves at the service of others, the poor, the needy, in the name of a sense of superior justice, of a yearning for what is right, good, beautiful.

Giving alms: is it charity?
Almsgiving to the poor is a manifestation of mercy strictly connected to the duties of a good Christian. In some ways, it is also…

Mother Teresa of Calcutta and her work of charity

And we come to Mother Teresa of Calcutta. Who better than she can represent the most shining and emblematic example of Christian charity? Hers is known to all: how from a very young age she manifested her vocation to good, how, as a missionary in India, she received what she called the call within the call, which prompted her to leave the tranquillity of the convent to immerse herself in true poverty, mixing with the last of the last, collecting their suffering and making it their own.

Who better than her can give us an example of what charity is, true charity, of love that is not spared, not sipped, granted based on actual needs and according to defined and precise methods?

Mother Teresa maintained relationships with heads of state and kings, collaborated with local and foreign personalities to open and manage reception and care centres for the poor, the sick and lepers. But it would be blasphemy to want to consider his work as a ‘business’ of any kind. Indeed, through her boundless mercy, her charity made of prayer, but above all of the action, Mother Teresa for years denounced those who with small and large actions had determined those situations of degradation and suffering in which she lived, alongside people who had lost everything, even the dignity of human beings. It was she, this tireless little nun, who fought against the hypocrisy of those who prefer to turn away, hiding behind alibis and excuses for not recognising their responsibilities, or simply their selfishness and their meanness. She took the new commandment of Jesus and lived it on her skin, in her flesh, day after day, until her death, loving anyone who came along her path as Jesus would have loved him, welcoming him, forgiving him, forgiving his sins, taking care of him as a brother, a sister, a son.

As Jesus was the Teacher of love, so was Mother Teresa in teaching people how to live that love most fully and authentically.

Good resolutions for the new year

Returning to us and good resolutions for the new year, how can we move to carry out works of charity towards others? There are many ways to manifest charity, many small daily gestures to live it every day, transforming it into a testimony of faith. It is not so difficult to let Jesus enter your life and make him your model of love. Every time we dedicate time, energy to someone, taking them away from ourselves, without profit, without ulterior motives, we are carrying out an act of charity. If we bring comfort to those who suffer, with our closeness, our words, even with gestures and practical help, we are acting according to the charity and mercy that Jesus wanted to be the basis of our living together.

If around us we see injustice, if we realize that someone does not live worthily, that he suffers from deprivation and shortcomings, and we intervene to improve his condition, we perform an act of charity. Everyone should have something to live worthily because God created the world for everyone to enjoy.

Buy Now:
Alms bag with locket
It is predisposed to be attached to the wooden handle.

Our sacrifice, the gesture, the offer, the support, the words of comfort, are the most powerful tool that has been given to us to make the world where we live a better place. It is up to us to use them in the best way, not to waste the gifts we have been made the object of, not to waste God’s love without doing our best to amplify its message and spread it around us. And not just at Christmas.

Related Posts...
The Canticle of the Creatures of St. Francis