Home » Religion » Footwear for clergy: how to walk comfortably on the path of faith

Footwear for clergy: how to walk comfortably on the path of faith 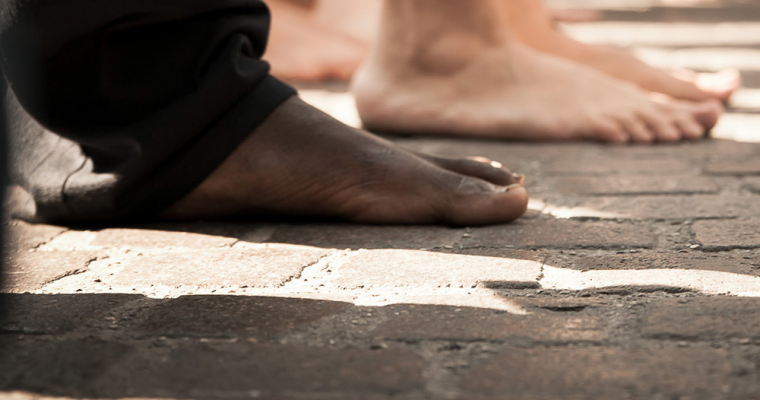 We can easily recognize priests and friars by the clothes they wear: the priest shirt and the friar tunic. Clergy clothing has its own rules and meaning, but footwear is also important. Let’s find out something more about that.

An article dedicated to clergy footwear can seem uncommon, but it’s not. We are not going to talk about fashion, but about a lifestyle embraced by those men who chose a life consecrated to Faith and, with it, to simplicity and frugality. Nevertheless, these men need to walk in order to spread Christ’s message throughout the world, to help those faithful that look up to them as point of reference. Therefore, we should not underestimate the importance of their footwear, which is in the end just as important as their clothes are.

We already mentioned how the concepts of simplicity and poverty were important for those embracing a religious life. In particular, we lingered on the differences between priest, friar and monk, three often convoluted words. About monks, we said they were men tired of all the violence and evil of their times, who chose to look for comfort in faith embracing an ascetic and lonely lifestyle, dedicating their lives only to prayer and contemplation. About friars, they dedicated their lives to imitate Jesus’ life, living in poverty, chastity and obedience.

Poverty in particular was the first duty imposed to those who wanted to become friars, and the consequent sacrifice of any property. Friars used to live like brothers, only relying on donations and offertory, in an environment of brotherhood and communion among them and with the people who helped them. Just think of Franciscan or Capuchin monks, and their choice to live a simple and poor life, consecrated to contemplation, prayer and preaching the Word of God.

The poor and humble lifestyle of monks and friars reflected into a modest clothing, with simple robes and only sandals to protect their feet; and so it is still today for modern friars.

The order they belong to (Franciscan, Benedictine, etc.) determines the differences in clothing. In general, religious clothing include an ankle-length tunic, its color depending on the institute of belonging: black, white, brown, but also blue, grey and light blue. Benedictine, Dominican and Augustinian friars tie their tunic at the height of their waist with a leather belt, while Jesuits and Carthusian monks wear a fabric belt.

The clothing of Franciscan friars is very particular. They wear the typical brown robes tied to their waist with a cincture, a rope tied in three knots representing Poverty, Chastity and Obedience, the three rules of the Order. They wear open sandals to their feet. The choice of a brown tunic comes from the fact that, at the beginning, poor clothes were not colored and kept the color of raw wool they were made of. Brown then, or grey. They were also the colors of soil, worn by farmers and by those who worked hard. We must keep in mind that Franciscan friars spent a lot of time travelling to spread comfort and relief to those in need. Brown or grey clothes were harder to stain even if they were forced to sleep rough. Francis chose the simplest robe possible for him and his brothers, which reminded a cross for its shape. He chose a rough, ungraceful fabric to mortify flesh, so that no one could ever envy it. He gave up a belt in favor of a rope, in order to be as close as possible to Jesus and his disciples.

Even Franciscan friars, like Padre Pio, tie their tunic at waist height with a rope, and are characterized by the long and uncultivated beard and the typical light brown tunic with a big hood. Sometimes they wear a scapular over their tunic (for example as Carmelites, Carthusians and Benedictines do): it is composed of a hood, typical of monastic and mendicant orders, and a cloak.  However, today many religious men prefer wearing more simple clothes for everyday use. If we think about clothes or shirts for priests, the first image we have is a clergyman, or if anything, a cassock.

Let’s get to sandals.

Sandals are probably the first footwear ever invented by men. Since the Stone Age, men used to protect their feet with leaves and vegetal fibers, and such rudimentary protections were the ancestors of the first sandals. About four thousand years before Christ’s birth, Egyptians made sandals with braided papyrus leaves. In Greece, they were made of leather, with a sole and some stripes to tie them to the foot, and so was in Rome as well. During medieval age, people began preferring closed shoes, because showing the bare foot was considered a bad form. Mendicant orders chose sandals, simple and humble footwear par excellence, as fundamental component of their poor clothing. They were very rough sandals, with simple leather or even wooden soles, tied to their feet with leather strips. Saint Francis preferred to go barefoot, but not all of his brothers could show his same endurance while walking on arduous paths.  It was very hard to give up protecting their feet from the cold and the asperity of the ground. Those who wanted to join the Order, but could not walk barefoot, were allowed to wear simple sandals. Since then, sandals remained the footwear par excellence of friars, the only one tolerated as an alternative to bare feet; they are a symbol of mortification and will to join Our Lord’s existential choices as much as possible, and to consecrate their lives to humbleness, poverty and sacrifice.

About clergy footwear, Holyart catalog offers a wide variety of shoes and sandals. In particular, Holyart shoes are made of real leather, made in Italy by a firm specialized in clothing and footwear for priests and clergy. The shoe is crafted with attention and precision, paying the utmost care to treatment and working of leather, keeping all of its properties intact.

Franciscan and Benedictine sandals by Holyart are handmade by the Monks of the Atelier de l’Etoile, in the monastery of Bethlehem (France). They are of great value and high quality, made of real leather. Leather is handcrafted and shaped; then it is sewn to the sole with a 100% warranty of being an artisanal product.

Related Posts...
Author: Holyart
Filed Under: Monasteries and Confraternities, Religion
The halo: origins and meaning
Clergy clothing: the simple elegance of the clergyman